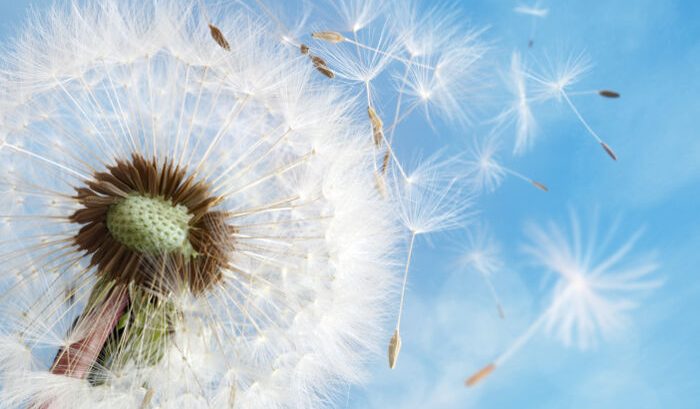 I remember going to the park as a kid. Sure my friends and I would have fun on the swings and slides. But sometimes during the springtime we just went to the park to have dandelion blowing competitions. We’d pick as many as we could and then we’d just huff and puff until we were all left just holding the stalks.

Who would have thought that three decades later I’d be featuring the dandelion as the ‘herbal spotlight’ on my blog?

When most people think of dandelions, a sea of annoying yellow flowers invading their lawn usually comes to mind, but there is more to this unassuming flower than meets the eye. For thousands of years, dandelions have also been used in a variety of herbal preparations to improve health.

In Western herbology, dandelion is often labelled as a “natural antibiotic”. It is rich in vitamin A (dandelion leaves contain more vitamin A than carrots!), vitamin C, iron and calcium and detoxifiers explaining its common inclusion in medicines.

Coincidentally, in Traditional Chinese Medicine it has long been used as an anti-inflammatory and an antidote to heat toxicity. So both western and eastern medicine seem to have reached a similar conclusion on dandelion’s medicinal uses.

Historically, dandelion (which literally translates into ‘lion’s tooth’ in French) has been used to relieve liver disorders, diabetes, urinary disorders, acne, jaundice and anemia. It also helps in maintaining bone health and skin care. Dandelion leaves and root have also been used to treat constipation, indigestion, heartburn, and to remove water from the body, while the root is used to increase bile production in the gallbladder and to treat liver problems.

In Traditional Chinese Medicine dandelion is referred to as ”Pu Gong Ying’ and is considered to be energetically bitter, drying, and cooling. According to TCM, dandelion clears heat from the liver and has a beneficial effect on the stomach and lungs. Its leaves can also ease acute mastitis, lung abscess, skin abscesses, swollen eyes, cold and fever and ‘stomach fire’ (gastrointestinal issues).

Dandelion flowers can be used to make dandelion tea which has the best effect when consumed in the morning. Traditional Chinese Medicine practitioners will prescribe dandelion tea to help detoxify the liver and get their body back on track. It is a powerful diuretic, which helps the body eliminate toxins more rapidly and promotes healthy kidney function. Dandelion tea also increases the concentration of certain detoxifying enzymes in the liver.

If you’re feeling run down, prepare yourself a cup of this healthy tea, which is made quite simply by steeping the flower petals in boiling water.

The rich blend of antioxidants found in dandelion tea can all help the body eliminate free radicals and minimize oxidative stress, which is a major cause of chronic illness, including cancer. By neutralizing these free radicals, this tea can help strengthen the immune system and improve your overall health and wellness.

The nutrient-rich roots can also be used to brew dandelion coffee. The coffee requires the dandelion roots to be dried, chopped, roasted and then ground down to be brewed into the powerful coffee substitute.

Both beverages have similar health benefits, and are becoming more and more popular.

My patients are often quite surprised when I tell them that the whole dandelion plant is edible. Leaves can be stir-fried or sautéed like spinach or used to make dandelion salad; dandelion root can also be consumed as a vegetable. Just be careful not to overdose on the herb and patients with stomach ulcers or gastritis are generally encouraged to avoid too much dandelion, as it may stimulate overproduction of stomach acid.