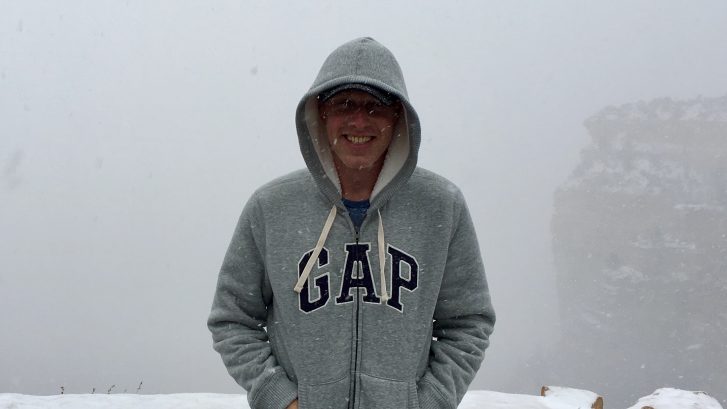 One of the things I admire most about Sascha, is his ability to keep me grounded; to help me not flip out or over-react when something doesn’t quite go according to plan; and to generally find the positive angle in every situation.

I’m writing this post looking at the bright side of a situation that at the time was pretty bland (and not quite what I was hoping for at all) … as you’re about to find out.

Ever since watching the Griswalds visit the Grand Canyon in National Lampoon’s Vacation as a kid, a trip to the Grand Canyon has always been on my bucket list. So when a recent conference took me to Las Vegas, I figured a day at the Canyon would be the perfect post-conference side trip.

I found a tour company that ran day tours to the south rim of the Grand Canyon and booked my ticket. The online brochure outlined a 6am hotel pick up, a quick stop at Hoover Dam, then out to the Canyon for a few hours of awesome viewing spots, before heading back to Vegas by 7pm.

With the conference out of the way, I couldn’t wait for the big day!

I boarded the coach at 6am from my hotel and we were on our way. The driver mentioned that the forecast was for “some light rain and perhaps a few light snow flurries” but reinforced that we’d be in for a great day.

At Hoover Dam I snapped a few quick pics (more just because I wanted to stretch my legs), before the coach headed along the famous Route 66 into Arizona.

I must have fallen asleep for about an hour and woke up when the coach pulled into a gas station. When I looked outside I could see the rain was pelting down.

We left the gas station and headed towards the Canyon. After about another hour or so the rain had clearly become snow … and even for an inexperienced Aussie (who had only seen snow once before), I could tell that it was more than just a flurry!

The coach slowed right down and continued at a snail’s pace for about another 45 minutes until we pulled into another stop.

We were told we were at our lunch stop.

I got off the bus and it was bitterly cold and the snow was coming down aggressively. I couldn’t even see across the road.

After a quick lunch the coach passengers were divided up into groups and directed to different jeeps. The jeeps were covered in thick plastic ‘hoods’ (they were clearly typically open vehicles). The seats were covered in melted snow and the wind was absolutely biting.

Our tour guide introduced himself and then let us know that in 18 years of living and working in the Grand Canyon, he had never seen a blizzard like this but we’d still head towards the south rim.

The 6 of us in the jeep were freezing so he offered us a blanket to share!

After about 20 minutes we arrived at what was supposedly (usually) the most breathtaking photo spot. I got out of the jeep and as I stood next to the jeep the snow came up past my ankles. I couldn’t feel my face (I was just wearing jeans and a standard hoodie) and my fingers started going numb.

I literally couldn’t see more than 2 feet in front of me. As far as I was concerned the fact that the spectacular Grand Canyon was (apparently) right there was irrelevant. I was being battered by a freak snow storm.

After less than 2 minutes standing on the edge of one of the Seven Natural Wonders of the World, I just wanted to get back into the damp jeep and get the hell out of there.

The guides had been instructed to leave the canyon due to the severe weather and that we would be taken to a nearby museum while the blizzard hopefully past over.

The “museum” turned out to be a wooden hut (about the size of an elementary school classroom) where we watched a video on how the Grand Canyon was formed.

Side note: I hated (and failed) geography at school. How rocks move over millions of years doesn’t really interest me in the slightest, and right now (with my feet now also numb from walking in the snow in regular runners) I was staring at an old TV monitor listening to a documentary about the canyon that looked like it was made in the 1970s.

Get me out of here.

I’d paid over $350 so far and was cold, wet, numb and watching an outdated DVD.

The guide then drove us back to the coach stop and we were told we could spend the next hour in the gift shop!

WTF? An hour looking at postcards, key chains and fridge magnets of what the Grand Canyon should have looked like?

We got back onto the coach and the expressions on all the other passengers were priceless. Nobody said a word. It looked like everyone was in a trance. Pissed off. Frozen. Over it.

We started crawling back towards the main road. The snow was now coming down even harder than before and it was starting to get dark.

10 minutes into the return journey, the driver announced that there was a bad accident up ahead. The traffic then came to a grinding halt. We literally weren’t moving.

The driver then announced he was putting on a movie.

I am not kidding here when I say I watched the entire Oceans Eleven movie and half of Dumb and Dumber before the bus even moved an inch. Outside the blizzard was still in full swing and clearly the roads were incredibly icy.

What should have been a roughly four-hour drive back to Las Vegas turned out to be over seven hours! Once the accident was cleared, we crawled back towards Sin City and I was dropped back at my hotel after midnight.

I was booked on a 6am flight back to San Francisco the next morning. I’d been out for 18 hours and literally hadn’t seen a thing. My mood was beyond foul. I couldn’t wait to write my abusive TripAdvisor review about my visit to the Bland Canyon.

But somehow Sascha’s voice was in my head … “Just breathe. Listen to your body. Take a deep breath”!

My body was telling me that it was still freezing cold, hungry, exhausted, and feeling completely ripped off!

But then Sascha’s voice continued in my head … “Remember that sometimes you just have to roll with the punches. Look on the bright side – you got to see snow for the second time in your life!”.

He was absolutely right.

The Grand Canyon isn’t going anywhere. I’ll be able to visit it some other time only next time if there’s even a hint of cloud I won’t get on the bus.

Actually better yet, I will book a helicopter trip over the canyon instead!