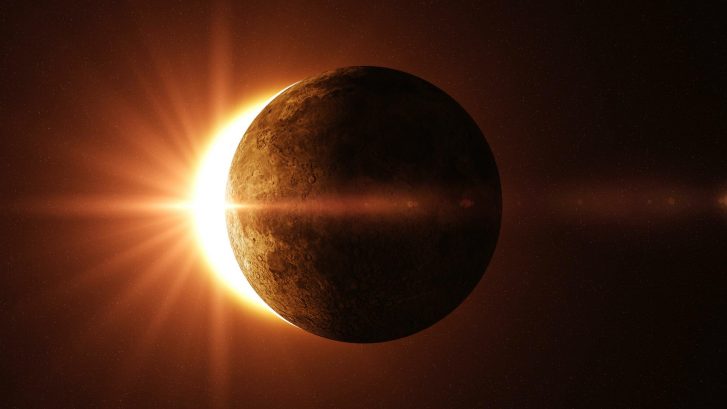 On Monday August 21st, the so-called Great American Total Solar Eclipse will darken skies all the way from Oregon to South Carolina along a stretch of land about 70 miles wide.

Whilst the eclipse won’t pass directly over us here in San Francisco, I wanted to share my thoughts on this cosmic phenomenon as well as some of the spiritual and mystical elements behind it.

A total solar eclipse occurs when the disk of the moon blocks out the last sliver of light from the sun in the sky. The moon orbits an average of 239,000 miles from Earth — just the right distance to seem the same size in the sky as the much larger sun. However, these heavenly bodies line up only about once every 18 months.

During what  ‘sky watchers’ refer to as totality, the area inside the moon’s shadow is cloaked in twilight. At most, the moon will completely cover the disk of the sun for 2 minutes and 40 seconds.

During totality, when the sun’s disk is completely covered by the moon, it is safe to view the eclipse with the naked eye. But you should never look at a partial solar eclipse without proper eye protection as this can cause blindness.

Solar eclipses always take place during a new moon. In astrological lore, la lune represents the mother, the divine feminine and the archetype of the nurturer. She is the governess of our emotions and deepest desires — and she has a dark side we’ll never see. New moons are times for planting seeds; for conceptualizing and initiating.

Astrologically speaking, eclipses usher in a time of change. Like any new moon, a solar eclipse represents the end of one cycle and the beginning of a new cycle. It means that all possibilities are on the table and you can rightly put yourself in the forefront of new plans for the future. It is the ideal time to make a fresh start and write down a to-do list on a blank sheet of paper.

A solar eclipse asks us to balance our head with the heart.  The heart offers guidance and truth while the head gifts us understanding and communication.

Ancient cultures tried to understand why the sun temporarily vanished from the sky, so they came up with various reasons for what caused a solar eclipse.

In many cultures, the legends surrounding solar eclipses involve mythical figures eating or stealing the sun. Others interpreted the event as a sign of angry or quarreling gods.

For example in Vietnam, people believed that a solar eclipse was caused by a giant frog devouring the Sun, while Norse cultures blamed wolves for eating the Sun.

In ancient China, a celestial dragon was thought to lunch on the Sun, causing a solar eclipse. In fact, the Chinese word of an eclipse, chih or shih, means to eat.

Korean folklore suggests that solar eclipses happen because mythical dogs are trying to steal the Sun.

The Pomo, an indigenous group of people who live in the north-west tell a story of a bear who started a fight with the Sun and took a bite out of it. In fact, the Pomo name for a solar eclipse is Sun got bit by a bear.

Meanwhile the Tewa tribe from New Mexico believed that a solar eclipse signified an angry Sun who left the skies to go to his house in the underworld.

Fear of solar eclipses still exists today. Many people around the world still see eclipses as evil omens. People in many cultures will get together to bang pots and pans and make loud noises during a solar eclipse, since it is believed that loud noises scare away the demon causing the eclipse.

Even though we won’t see the total solar eclipse first hand, if you look up on August the 21st , you may still see the sky appearing a little eerie … and now you know why.